Istanbul: City of Majesty at the Crossroads of the World
(eAudiobook) 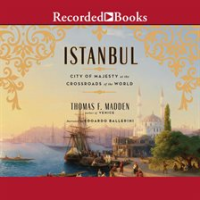