Catalog They were strong and good / »  Book »

They were strong and good
(Book) 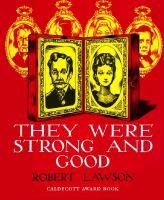 Description
Awarded the Caldecott Medal in 1941, They Were Strong and Good is a classic book that follows the path of one family's journey through American history. Robert Lawson introduces us to his forefathers and with them we brave Caribbean storms, travel to the wharf markets of New York, and fight in the Civil War. Amidst these adventures Lawson's grandparents meet, marry, and raise a family, and later his parents follow the same cycle of life. But this book is more than just the story of one family, it's a social history of our country. It reminds us to be proud of our ancestors--who they were, what they did, and the effect that they had on the nation we live in today. None of them were great or famous, but they were strong and good. They worked hard and had many children. They all helped to make the United States the great nation that it now is. Let us be proud of them and guard well the heritage they have left us.
Also in This Series

Note! Citation formats are based on standards as of July 2010. Citations contain only title, author, edition, publisher, and year published. Citations should be used as a guideline and should be double checked for accuracy.
Staff View
Grouped Work ID:
10f4e180-b92f-0721-b0d1-3d822f131bb2
Go To GroupedWork