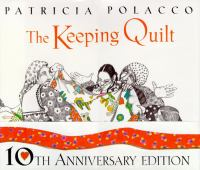 Description
When Patricia's Great-Gramma Anna came to America as a child, the only things she brought along from Russia were her dress and the babushka she liked to throw up into the air when she was dancing. Soon enough, though, Anna outgrew the dress and her mother decided to incorporate it and the babushka into a quilt. "It will be like having a family in backhome Russia dance around us at night," she said. And so it was. Together with her Uncle Vladimir's shirt, Aunt Havalah's nightdress, and an apron of Aunt Natasha's, Anna's mother made a quilt that would be passed down through their family for almost a century. From one generation to the next, the quilt was used as a Sabbath tablecloth, a wedding canopy, and a blanket to welcome each new child into the world. The Keeping Quilt, Patricia Polacco's signature piece, was first published in 1988 and won the Sydney Taylor Book Award from the Association of Jewish Libraries. This edition has been expanded to include Patricia's two children, who have also been able to share in the family tradition by using the quilt for birthdays and for play. Now a new generation of readers will come to cherish this heartwarming story of one family's special symbol of enduring love and faith.wn family, and the quilt that remains a symbol of their enduring love and faith.
Also in This Series

Note! Citation formats are based on standards as of July 2010. Citations contain only title, author, edition, publisher, and year published. Citations should be used as a guideline and should be double checked for accuracy.
Staff View
Grouped Work ID:
8910ea02-e4ac-f791-4d31-b278ad27c40b
Go To GroupedWork