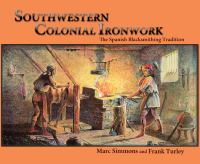 Colonial blacksmiths were more common in the American Southwest and their work more sophisticated than has generally been recognized. They forged all manner of domestic utensils and hardware and served as gunsmiths, armorers and farriers. This book is the first historical and practical survey of the full range of ornamental and utilitarian ironwork used and made by Spanish people in California, Arizona, New Mexico and Texas from the 1500s to about 1850, and is one of the most complete pictures of any Southwestern colonial craft. It presents, also for the first time, a detailed summary of the distinctive methods employed by the old Hispanic smiths.

The book contains two parts. The first looks at the early iron manufacturing and blacksmithing industries of Spain and Mexico. The second deals with the colonial smith, his equipment, his methods, and the products of his forge. Information on these subjects has been derived from documents such as wills of blacksmiths, supply lists of expeditions, and inventories of mission workshops. All in all, the book is an invaluable and permanent source for practicing blacksmiths, historians, archaeologists, craftspeople, antique collectors, designers, and architects. Two hundred black and white photographs and fifty line drawings are included as well as a glossary of Spanish smith terms.

Note! Citation formats are based on standards as of July 2010. Citations contain only title, author, edition, publisher, and year published. Citations should be used as a guideline and should be double checked for accuracy.
Staff View
Grouped Work ID:
c9771542-ed30-5cde-f8ed-2e1e3789b640
Go To GroupedWork