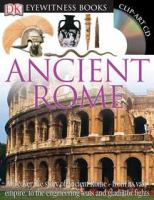 Description
Full-color photos. "An excellent glossy catalogue of entertaining information about a civilization of antiquity. Family life, household effects, cosmetics, sports, children's dress and games--all these and more are on display in eye-filling spreads. Either read chronologically or browsed through, each page offers up a sterling visual feast guaranteed to spur discussion and provoke thinking about the early Romans."-- Kirkus.
Also in This Series

General Note
Accompanied by CD-ROM titled: Ancient Rome: clip art.
General Note
Originally published in London in 1990.
General Note
Includes index.
Description
A photo essay documenting ancient Rome and the people who lived there as revealed through the many artifacts they left behind, including shields, swords, tools, toys, cosmetics, and jewelry. Here is a spectacular and informative guide to the fascinating story of ancient Rome. Superb color photographs of Roman armor, tools, jewelry and more give the reader a unique "eyewitness" insight into the history of the Roman Empire. See the sword of Tiberius, a gladiator's helmet and shield, the contents of a Roman burial urn, real food cooked from Roman recipes, marbles Roman children played with, and inside the colosseum. Learn how the Romans built roads, why the baths were so popular, how Roman physicians healed the sick, why the army was so efficient, and how wine was made. Discover how sea battles were staged in the colosseum, what Roman children learned at school, how Roman society was organized, and much, much, more.
Similar Series From NoveList
Similar Titles From NoveList
Similar Authors From NoveList
Editorial Reviews
Published Reviews
Reviews from GoodReads
Loading GoodReads Reviews.
Citations
APA Citation (style guide)

Note! Citation formats are based on standards as of July 2010. Citations contain only title, author, edition, publisher, and year published. Citations should be used as a guideline and should be double checked for accuracy.
Staff View
Grouped Work ID:
0b9d6a46-679d-760e-7842-bf1fe212b8c2
Go To GroupedWork