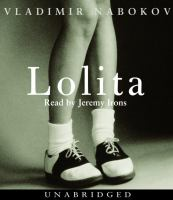 Awe and exhilaration-along with heartbreak and mordant wit-abound in this account of the aging Humbert Humbert's obsessive, devouring, and doomed passion for the nymphet Dolores Haze. Lolita is also the story of a hypercivilized European colliding with the cheerful barbarism of postwar America, but most of all, it is a meditation on love-love as outrage and hallucination, madness and transformation. With an introduction by Martin Amis.

From the Hardcover edition.

Note! Citation formats are based on standards as of July 2010. Citations contain only title, author, edition, publisher, and year published. Citations should be used as a guideline and should be double checked for accuracy.
Staff View
Grouped Work ID:
284fc618-3e81-1ce5-9de9-f2dfcec6d60c
Go To GroupedWork