Autobiography of a Yogi
(Audio CD) 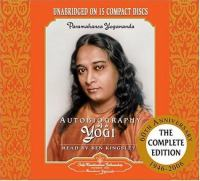 Selected as "One of the 100 Best Spiritual Books of the Twentieth Century," Autobiography of a Yogihas been translated into more than 30 languages, and is regarded worldwide as a classic of religious literature. Several million copies have been sold, and it continues to appear on best-seller lists after more than sixty consecutive years in print.

Self-Realization Fellowship's editions, and none others, include extensive material added by the author after the first edition was published, including a final chapter on the closing years of his life.

General Note
Unabridged.
Participants/Performers
Read by Ben Kingsley.
Description
This acclaimed autobiography presents a fascinating portrait of one of the great spiritual figures of our time. With engaging candor, eloquence, and wit, Paramahansa Yogananda tells the inspiring chronicle of his life: the experiences of his remarkable childhood, encounter with many saints and sages during his youthful search throughout India for an illumined teacher, ten years of training in the hermitage of a revered yoga master, and the thirty years that he lived and taught in America. Also recorded here are his meetings with Mahatma Gandhi, Rabindranath Tagore, Luther Burbank, the Catholic stigmatist Therese Neumann, and other celebrated spiritual personalities of East and West. The author clearly explains the subtle but definite laws behind both the ordinary events of everyday life and the extraordinary events commonly termed miracles. His absorbing life story becomes the background for a penetrating and unforgettable look at the ultimate mysteries of human existence.
System Details
Compact disc.
Similar Series From NoveList
Similar Titles From NoveList
Similar Authors From NoveList
Editorial Reviews
Published Reviews
Reviews from GoodReads
Loading GoodReads Reviews.
Citations
APA Citation (style guide)

Note! Citation formats are based on standards as of July 2010. Citations contain only title, author, edition, publisher, and year published. Citations should be used as a guideline and should be double checked for accuracy.
Staff View
Grouped Work ID:
742ad5d4-b257-2fc9-0a81-cc58c9244f18
Go To GroupedWork