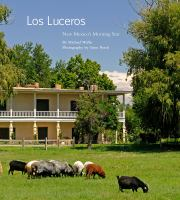 Bibliography
Includes bibliographical references.
Description
"Michael Wallis weaves the complex story of Los Luceros throughout the larger context of Northern New Mexico history, from the earliest human inhabitants to the present day, introducing its past occupiers, owners, and visitors, including Spanish and American soldiers and cavalrymen. During Mary Cabot Wheelwright's long reign at Los Luceros, it was visited by New Mexico's prominent writers, artists, and art patrons, including Georgia O'Keeffe, Mabel Dodge Luhan, and D. H. Lawrence. During the past decade, the property was acquired by the State of New Mexico to be managed by New Mexico Historic Sites as a living museum. The centerpiece at Los Luceros is a 5,700-square-foot, eighteenth-century, Territorial-style adobe hacienda, which was renovated by the Cabot Foundation in 2004 and is listed on the National Register of Historic Places. In addition to the hacienda and a visitor center complex, the property also includes three residences, an eighteenth-century chapel, the original village jail, numerous farm buildings, apple orchards, and irrigated pasture and bosque adjacent to the Río Grande. Award-winning author and historian Michael Wallis first visited Los Luceros in 1971 -- the first of many visits over the years during which time he became acquainted with the Colliers and subsequent occupants. During the course of writing this book, Michael lived in the River House for several months. Contemporary color photographs taken year-round by Gene Peach at Los Luceros document buildings and their architecture, Spanish colonial and twentieth-century art, as well as acres of land, including orchards, livestock, and wildlife. Historic photographs from private and public collections illustrate the narrative, recalling important figures and moments in Los Luceros's past"--,Provided by publisher.