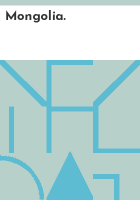 Creation/Production Credits
Camera, Lynn Mitchell ; editors, Graham Barker, Justin Missingham ; music by The Insects ; title music, Ian Ritchie ; researcher, Kate Imeson ; series producer, Angela Gourley.
Participants/Performers
Traveler, Ian Wright.
Description
Mongolia, sandwiched between Russia and China, was part of the Soviet bloc for more than 60 years. Since the collapse of the Soviet Union in 1991, it has been a free and democratic country. Ian Wright takes a train from Beijing, China, to Ulaan Baatar or "Red Hero", Mongolia's present day capital. He travels north-west to Karakorum then across the Gobi desert before returning to Ulaan Bataar in time for the annual Naadam festival.